Both of these songs were written to be sung by groups, and both have already found a life beyond me, as others have carried them elsewhere and shared them with different communities. So I've finally recorded them so they can be shared even more broadly.

Go ahead and give them a listen! 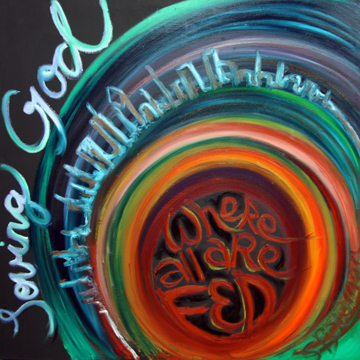 The first song is a setting of the Lord's Prayer, which is designed to be singable. Simple melody, contemporary language, easy harmonies.

The second song was written years ago for a youth retreat, as an end-of-the-day prayer. The text is from Psalm 4, which has been used for bedtime prayers for centuries.

In response to many requests, I've also created sheet music for these two songs as printable PDF files, which can be purchased here.

As always, there are a lot of people to thank. Bethany Clearfield is the beautiful voice you hear on the Lord's Prayer. Oliver Holmberg's sound engineering makes me sound so much better than I do in the shower. Shawna Bowman made the beautiful painting during a worship service at Friendship Presbyterian Church that focused on the Lord's Prayer. Jeff Moles has helped these songs grow up, and gave invaluable feedback on the sheet music. Several classes of PC(USA) Young Adult Volunteers will recognize both songs. And in 2005 Joel Blunk had the idea to sing an evening prayer using Psalm 4, and he liked what I wrote, and the FISH group of State College Presbyterian Church brought it to life, and Roxy Gahegan gave my songwriting one of the best compliments of my life.

Thanks to Katie for singing these songs around the house at random, to everyone who has asked for recordings or sheet music, and to all of you who encourage and support my songwriting in all kinds of ways.